Switch to Bassoon
A Guide for band students

So you want to Play Bassoon? Great choice!

The Bassoon is just like any other band instrument it takes air to make it play and practice to sound good!  No matter what some teachers say, almost anyone can play bassoon regardless of their body size or hand size.  The Bassoon is a beautiful, wonderful instrument!
This site will get you started on learning how to play Bassoon. Follow the drop down links above for step by step instruction on how to play the Bassoon.

Before you get started read below!

It is expected that all students using this website have played another instrument and know basic musicianship. You will also need to know some fundamentals of playing a wind instrument such as proper breathing, proper sitting posture, and instrument position.
This website is only a resource for instrumentalists switching to bassoon.
Private lessons are highly recommended as it is the best way of instruction.

My Band doesn't have a Bassoonist

A Brief History of the Bassoon

The modern bassoon has a colorful and complex past. It evolved from a 16th century instrument known as the “dulcian”.  This ancestor of the bassoon, which was also played with a double reed, was made out of a single piece of wood rather than the four separate sections common to today's bassoon and it provided the important bass line in early 16th century music.

Later in the 17th century, it was the French who transformed the one-piece dulcian into the multi-sectioned instrument that we have today.  Carl Almenräder (1786-1843) is the most significant contributor to the design of the modern bassoon. He improved the sound and note capabilities of the instrument.  In 1831, he and J. A. Heckel founded a factory which manufactured the modern German system bassoon.  During the 18th and 19th centuries the bassoon was gradually improved and refined. It evolved from the three-key model played during the time of Mozart to six keys during Hayden's time to the the present 17 to 24 key versions of today.

Today the bassoon is used in the symphony orchestra, wind symphony, opera, and most recently in the contemporary musicals of the 20th century, television, and movie soundtracks.  These versatile instruments add to the bass line, play solos and blend well with other instruments. Innumerable composers (Vivaldi, Mozart, Mahler, Villa-Lobos, Saint-Saëns and Stravinsky, just to name a few) have written for the bassoon, particularly during the 18th century, and the repertoire includes impressive parts in orchestral scores, woodwind ensemble music and many bassoon solo concertos. 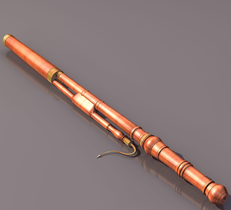